This site is under construction. The layout and technique is working (maybe some fine-tuning needed coming time). For the coming months we will be adding and updating content. 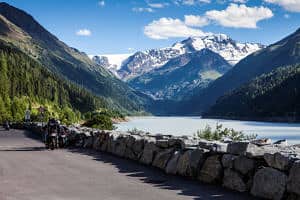 List of objects with monument protection in the Kaunertal valley

info about the trail

The hut is starting point for many hikes, summits and ice routes: Weißseespitze, Glockturm, all popular mountains of 3000 meters can be climbed from the hut. About 15 minutes from the hut is the rock climbing area, right next to the Kaunertal Glacier Road. 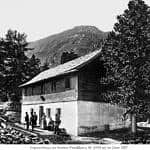 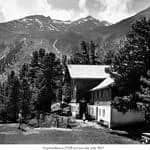 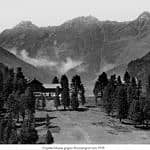 The name “Gepatsch” is attributed to Roman roots and means “large, barren field”. Today, the hut can offer over more than 100 people a place to sleep. The house is owned by the DAV section Frankfurt am Main. The house is open from June until September. There is no winterroom available.

In 1895, the chapel known as ‘Maria im Schnee’ was built next to the Gepatschhaus. In the chapel, built entirely of wood, church services were held for the mountain guides and their guests, they asked for the protection of the Virgin Mary, so all would return back safe and unharmed from their hikes. For practical reasons, when there was not enough sleeping space in the Gepatschhaus, a few guest rooms were built behind the altar in the chapel. 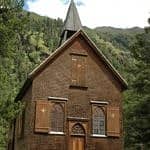 Thanks to its easy accessibility the Nasserein alm is a popular destination. With its own dairy operation, it is the home of the cattle of the local communities of Kauns and the Kaunertal valley. On this alp, you earned a break with a glass of milk and homemade alp cheese. 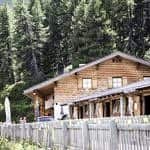 The Gepatsch Stausee is a reservoir in Tyrol in Austria. It is situated at the end of the Kaunertal valley, at a height of 1765 meters above sealevel. It feeds the Kaunertal hydro-electric power station of TIWAG in Prutz over a gradient of approx. 900 m. The reservoir has a maximum volume of 138 million m³ of water and, at full stowage, a total surface area of ​​2.6 km². It is mainly fed by the wild rivers that flow into the Kaunertal valley. Water from the creek Taschachbach in the near Pitztal valley is also transported to the Gepatsch reservoir. In this way, an area of ​​279 km² is drained through the reservoir.

The dam, which is entirely constructed from earth and covered with locally collected dump stones, was constructed between 1961 and 1964. Upon completion, the dam with a length of 600 meters and a height of 153 meters was the ninth largest in the world. The reservoir is approximately six kilometers long. The road Kaunertaler Gletscherstraße runs along the Gepatsch Stausee. 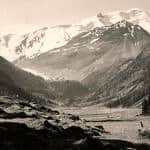 The gpx in this one way trail starts at the Gepatschhaus and leads into the Kaiserbergtal valley, then follow path no. 37 (almost parallel to the slope). On the way you will be accompanied by beautiful views of the reservoir, you can take a break at the Nasserein alm and the trail ends at the Kaunertal reservoir dam.

Return the same way or else by bus back to the hut. The duration is 4 hours, but it takes longer if you stop for photo’s or take a break at the Nasserein alm.

From the Gepatschhaus, follow the signposts across the beautiful, flat pasture to the south. Now, the Gepatsch pasture is in sight, it can be reached via the access path that leads right over the bridge.

Follow the road along the pasture to the north. A beautiful field road leads to the cross, where the path branches off towards the Nasserein Alm. After the first flat part, now the hike starts to climb.

The path continues through a beautiful pine tree forest, with interesting perspectives in its clearings, you quickly gain height. After this part of the trail, you may come across some secured places that are easy to walk on but need some attention. During the trail we cross two streams, their bridges can be wet and slippery. A little caution is also required here. Then the bench at the waterfall invites you to take a rest. The main climb is already behind you.

In the next part of the trail, you hike through the area of ​​the Breitlahn, where alpine roses and mountain pines dominate and sometimes deer can be observed.

From the white sign follows a passage with two parallel paths – you take the lower one. A little later you come across a field road. Following this, attention can now be devoted entirely to the picturesque view. With a slight counter climb you reach the Kaiserbergtal valley, cross the stream and hike down into the pine forest, as well as for a well-deserved stop at the Nasserein alm. From the alm you go down the access path to the reservoir. Then follow the quayside to the left to the dam and the Café Seepanorama. There you can review the route with refreshing drinks. 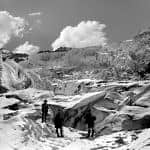 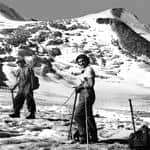 Guide Eduard Larcher with a female tourist at the mountain Brochkogel
© www.kaunertaler-gletscher.at

Eduard Larcher was the founder of the later hotel Kirchenwirt in Feichten in the Kaunertal.