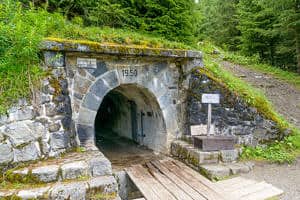 Entrance to the Gallrutt tunnel

Although the south oriented slopes in the villages Kauns and Kaunerberg are fertile, the local population suffered over decades from crop failure because of water shortage as this area belongs to the few with the lowest amount of rainfall in Austria (rainfall less then 600 mm/year). This resulted in closing of farms accompanied by massive migration of locals in the first half of the 20th century. 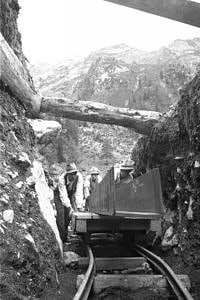 Building the channel from the Gallruttalm towards the Gallrutt tunnel (August 1950).
Source: Bildarchiv der Österreichischen Nationalbibliothek

After the Second World War it was decided to build a 12 kilometer long irrigation system fetching water from the “Gallrutt Gletscher” (Gallrutt glacier) and leading this water via a channel and two tunnels along the mountain slope towards the village Kaunerberg.  This water could then be used to irrigate the fields, orchards and gardens.

The required capital was funded by the Marshall Plan (officially named the European Recovery Program – ERP), an initiative of the United States after the Second World War to help rebuild the Western Europe economy. The “Kaunerberger Wasserweg” is the only project within the Alps realized with funds from the Marshall Plan.

Building the irrigation system took place from 1947 to 1954 and was at that time an engineering masterpiece. It created opportunities for the local people to generate an income after the war. Since then the “Kaunerberger Wasserweg” assured the irrigation of the fields and orchards of the Kaunerberg and Kauns villages for over 50 years.

The water flows through two tunnels in the rock, open and covered gullies (made from quarry stones) and basins downwards. Along the channel the water is mainly being distributed via sprinkler systems.

Parking is possible nearby the trail towards the Gallrutt stollen or  little bit further at the Falkaunsalm.

How to get there by public transport?

The hiking trail starts at a path from the Falkaunsalm straight down to the woods below it. After some 200 meter descend a path is crossed which follows the “Kaunerberger Wasserweg” towards the Gallrutt tunnel.

View on the Kaunertal from the Falkauns alm

Hiking trail downwards from the Falkaunsalm

It is possible to walk through the almost 1000 meter long Gallrutt tunnel if it is not locked, which may happen in spring during snow-melt or in dry summers if water is required for irrigation. To pass the tunnel pocket lamps are required and water-proof shoes are recommended. Instead of electric lights torches are really atmospheric, but you should bring them by yourself as the box at the tunnel very likely will not contain torches as can be seen in the photos below from summer 2014.

The height is about 1.8 meter so that most people can walk upright or slightly ducked.  Be  aware that the height fluctuates now and then! Halfway the tunnel there is a small side tunnel providing a great view to the Kaunertal.

From there we walk back to the Falkaunsalm via the “Dr. Angerer Panoramaweg”.

Describe how to get at the start of the trail. Include photos if required

5. Recommended maps for this region: