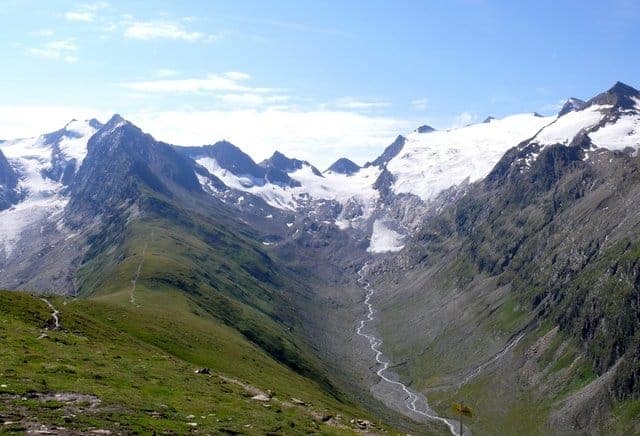 Alpine research in the region of Obergurgl

The Rotmoosferner (ferner is the German word for glacier) is situated near Obergurgl, at the end of the Ötztal, in Tyrol in Austria. The glacier at the end of the Rotmoostal valley extends in a height of about 3400 to 2400 meters and covers an area of about 3 square kilometers.

Like most glaciers in the Alps, the Rotmoosferner has been affected by the glacier melt since the middle of the 19th century. In 1858, the maximum extension of the glacier end moraine was measured at a height of approximately 2300 m. Since then, the glacier has retreated and lost massively and surfacely (interrupted by short advances between 1916 and 1922, as well as in the 1980s). Between 1850 and 2006, the length went back by about 2 km, and the ice thickness in the area of the tongue around 150 m. In 2005, the existing connection with the Rotmoos waterfall glacier was demolished.

In its retreat, the glacier leaves moraine and gravel surfaces, on which gradually pioneer vegetation settles. One of the first plants to be found in this area is the feldspar, quarry stone crust and alpine lemming. After 20 years of ice-freeness, the first lawn plants such as the Poa Alpina (alpine meadow grass) occur. The first representatives of soil fauna are jumping tails, mites and enchyroses as well as butterflies and beetle larvae.

Up to 28% of the Rotmoos glacier is covered by cryoconite, a powdery windblown dust with organic components. As a result, the albedo of the glacier is altered, the darker places are heated more strongly by the solar irradiation, melting more rapidly than the surroundings and leaving depressions in the ice, so-called cryokonite holes. In the cryokonite of the Rotmoosferners the Hypsibius klebelsbergi Mihelčič was found, which can survive times without oxygen as well as extremely low temperatures in cryobiose.

There are fascinatingly different stones at the Rotmoos valley. The darker rocks often contain not only the shiny mica red garnets and dark hornblende, the bright rocks are marbles from the Schneeberger. Near the Schönwieshütte is a several thousand year old peat bog.

There should be a certain degree of certainty. Also on this section you can observe marmots. The rest of the way is easy. On the Schönwieshütte you can then take a rest before it goes back to Obergurgl.

In Obergurgl, you take the cable car Hohe Mut Bahn (in two steps, travel time not included), with a little luck you can see some alp marmots underneath you. The panoramic view from the Hohe Mut is overwhelming, with high mountains, framed by glaciers. From here, at a height of 2600 meters, walk over the flat ridge to the south. A beautiful trail will lead you on high moorland with a view at the Rotmoos glacier. Take the slightly ascending path towards the glacier. Then you descend the slope to the foot of the glacier. Take care of your steps in this part of the trail!

At the stamping point, you can have a short break and make some pictures. After a walk through the Rotmoos valley, you can take a longer break at the Schönwieshütte. The rest of the trail is easy.

On the way back towards Obergurgl the trail leads through a 300 year-old pine forest, the GPS trail in this post ends at Vitalhotel Mühle in Untergurgl. 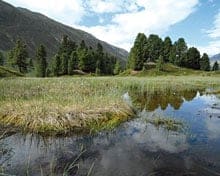 The trail starts at the (top) mountain station of the Hohe Mut Bahn. In 2017, this cable car is open from June 24 until September 17, daily from 9 am until 4 pm. 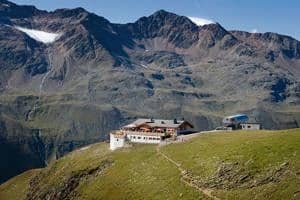 There is a free parking lot at the Festkogelbahn, at the beginning of Obergurgl.

By car: From Wenns, drive out of the Pitztal to Imst. Follow the B171, follow the signs to the B186 (Ötztal), from Zwieselstein follow the L15 to Obergurgl.

By bus: From Wenns, to Obergurgl (bus change in Imst), duration 2 hours, 15 minutes.

From the (top) mountain station of the Hohe Mut Bahn, you walk over the ridge until you reach the Rotmoos glacier. You walk back through the Rotmoos valley, you can take a break at the Schönwieshütte. Back to Obergurgl, you walk the Alpine Interactive Trail through the Obergurgler zirbenwald, this is a 300 year old pine forest.

The length of the trail is 9,9 kilometers, without stops the duration is 5 hours (the Hohe Mut Bahn is not included). On the website www.outdooractive.com you can find some other trails that pass the Rotmoos glacier and/or the Schönwieshütte, also starting point Hohe Mut Bahn and end point in Obergurgl.