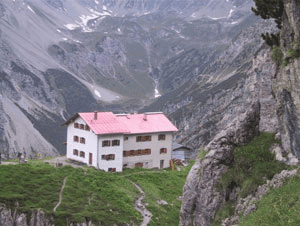 the trail including GPS

car route from Landeck to the Alfuzalm

The Steinseehütte is framed by the mighty Parzinn group, in the Oberinntal, in Tyrol. The hut is situated below the Steinsee, on a green terrace. Nowadays, it is owned by the section Landeck of the ÖAV, the Austrian Alpine Club. 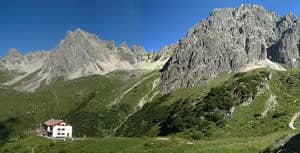 The first very small Steinseehütte was built in 1924. It was visited by regional living climbers. A kitchen was built in a new room and after the Second World War, the hut was enlarged, by attaching a stone building to the existing wooden hut. This expansion was completed in 1954.

The visits to the new hut increased continuously. Therefore, another enlargement was started in 1966 and finished in 1968. From 1980, the small winter room hut had become dilapidated. In a construction period of 2 ½ months, during the summer of 1983, another annex was created. In 1984, all internal work and facilities could be realized. In September 1999 the installation of a photovoltaic system was completed. Through this modern and environmentally friendly facility, the energy supply of gas could be converted to electricity.

Also the water supply has been completely renovated. In June 2002, the sanitation was improved by the installation of a solids separator. In the autumn of 2007, the hut was provided with two hot water showers. In the years 2010 – 2011, the kitchen was renovated and a drying room was built. Also the photovoltaic system was expanded and renewed. The parking lot on the Alfuz Alm was enlarged. In 2012, the terrace was redesigned.

The trail starts from the parking lot at the Alfuzalm, near Landeck. From there it goes in a relaxed walk in 2,15 hours up to the Steinseehütte. The total distance to the hut is almost 5 kilometers. The climb from the Alfuzalm to the hut rises almost 800 meters.

From the hut, in an half hour walk, through green meadows, you can reach the Steinsee, a lake at a height of 2222 meters. Deep blue water, with a green frame and surmounted by wild jagged peaks. 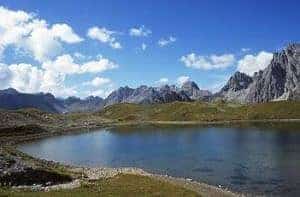 The trail starts at the Alfuz alm, here is a parking lot (free of charge). 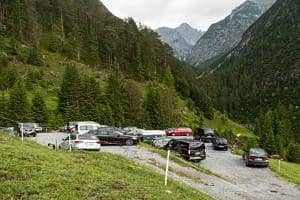 By car: From Wenns, drive through Piller and Flieβ towards the railway station (Bahnhof) in Landeck. Follow the B171 towards Innsbrück, through Zams (do not take the Autobahn A12). Approximately 1 km before Zams it branches off from the highway B171, directly after the avalanche shelter on the left (signpost), under the motorway and before gravel sharply to the right (signpost). Now follow the left forest road about 4.3 km to the Alfuzalm.

By bus: There is a bus connection between Wenns (centre), via Immst to Starkenbach.

From the parking lot, descend about 100 meters towards the Alfuz Almhütte. Follow roadnr. 625, after 3 km to the junction Württemberger Haus. Bear to the right, there is a signpost to the road to the Steinseehutte. 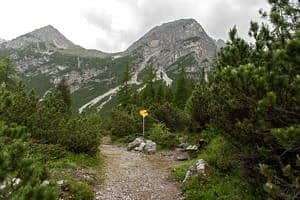 For people used to heights it takes 2.15 hours to reach the Steinseehütte. When enjoying the scenery more relaxed, taking photo’s etc. it will take 2.5 to 3 hours.