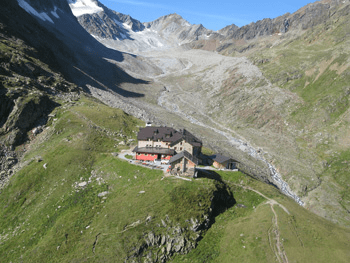 info about the air plane crash (in German)

trail from outdooractive with GPX (in German)

European Union bird privacy policy (in german), Regulates the protection of wild birds and their habitats in the European Union

trail from bergfex with GPX (in German)

The original lodge was built from natural stone, in 1873/74, as third hut of the German Alpine Club, (in German Deutsche Alpen Verein (DAV)). In 1898/99, the new Taschachhaus was built by the DAV section Frankfurt. In the years 1969 and 1979/80, it was expanded and modernized.

The current winter house was built in 1999. From 2005 to 2008, the main building was renovated and expanded, the volume of the house was doubled. The roof shape was retained and now it has a storm-proof form. From 2010, the Munich section of the DAV has acquired the Taschachhaus of the section Frankfurt.

The Taschachhaus is situated near Mittelberg, at the end of the Pitztal valley, at an altitude of 2434 meters, next to the tongue of the Taschach glacier. 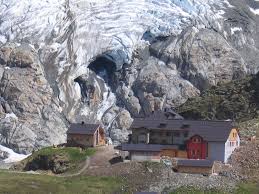 As European bird sanctuary or in English “Special Protection Area” (SPA) is called the protected areas, which have been designated on the basis of Art. 4 (1) of the Birds Directive. Together with the protected areas under the Fauna Flora Habitat Directive (1992), the FFH areas, the special bird protection areas make up the European network of protected areas  Natura 2000. The size of the SPA in the Ötztal alps is 396.84 km². 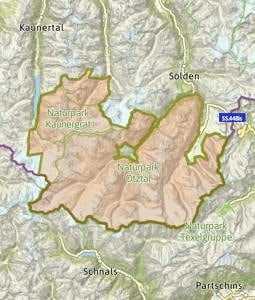 Map of the SPA of the Ötztal alps
© www.outdooractive.com

The trail starts at the parking lot of the Pitztaler Gletscherbahn in Mittelberg, take the rightmost parking, right next to the start of the trail. Just follow the yellow signs towards the Taschachhaus. During the hike, the Taschach creek is passed a few times, before reaching the goods lift, at the end of the valley. From there, the trail goes steep uphill, over the moraine hills, to the Taschachhaus.

The trail is situated in the following protected areas: Naturpark Kaunergrat and Vogelschutzgebiet Ötztaler Alpen.

During the Second World War, an American Boeing B17 Flying Fortress (a four-engined heavy bomber for the long haul), crashed on the glacier. On October 23, 1944, this bomber was on the go from Sterapone (Italy), to an ammunition factory in Pilsen (Czechoslovakia). After the plane was hit by an anti-aircraft fire, the bomber got leaderless and the pilot Howard Dallman tried to reach neutral Switzerland. About Sölden in the Ötztal, the nine-man crew bailed out with a parachute.

The bomber crashed on a mountain wall and the wreckage crashed to the underlying Taschach glacier. Nowadays, still several wreckage pieces are lying on the western edge of this glacier, to about 2,500 m. The largest pieces of wreckage are a tire (Ø 1,5 m), incl. rim and shock absorbers, an engine block (Ø 1.2 m), several wing parts (corrugated iron), up to 10 m2 and 2 empty tanks. This place is called “the Flyer” (in German: beim Flieger). From the hut to the Flyer is a 30 minutes hike, surefootedness is required. 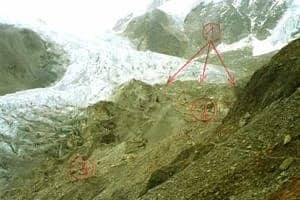 Location of components of the B17
© Keith & Helene Bullock 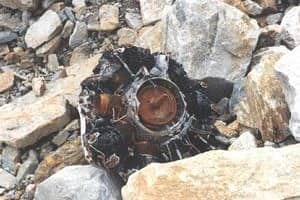 From the place “Beim Flieger”, you can reach the Taschach glacier in a 15 minutes walk. 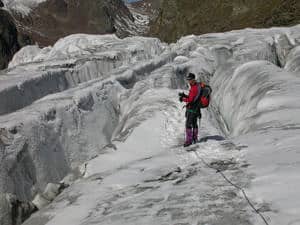 The trail starts at the parking lot of the Pitztaler Gletscherbahn in Mittelberg, the rightmost parking place is the closest to the start of the trail. 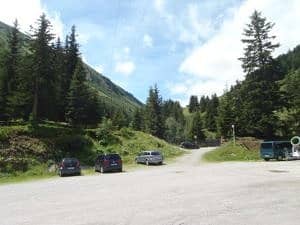 Parking lot with starting point of the trail
© Outdooractive

By car: From the center of Wenns, follow the L16 (Pitztaler Landesstrasse), up to Mandarfen and turn just outside the town on the right to “Parking Talstation Gletscherbahn”.

By bus: There is a bus connection between Wenns and Mittelberg (ÖBB 4204), it takes 54 minutes. 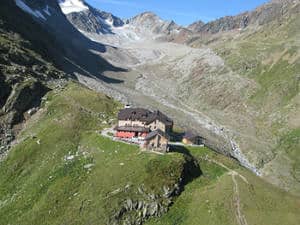 From the starting point, follow the yellow signposts towards the Taschachhaus. First you cross a wide wooden bridge over the Taschach creek, which is also designed for downhill runs in the winter.

After a short time you reach the Taschach valley (1796 m) with its beautiful flower meadows. Here is a little lodge, the Taschach Alm. From there, go left down to the stream (the path on the right leads to the Riffelsee). After crossing the Taschach creek, follow the flat way until you reach the valley station of the material cable car (2042 m). 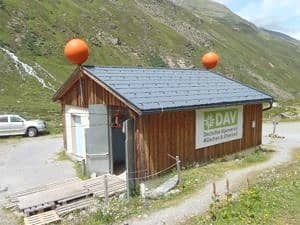 From there, the hiking trail goes straight on, do not cross the creek – the old way to the west side of the valley is blocked because of a slope slip, as of July 2012. 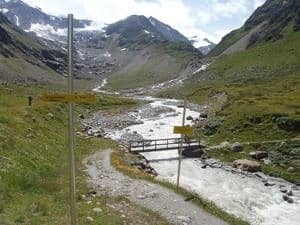 Take the road to the left
© www.outdooractive.com

After a while, you cross a new sturdy wooden bridge over the Taschach creek, follow the path along the glacial moraine begins to rise steeply. 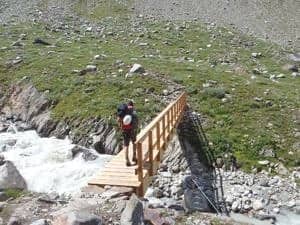 Then it takes a few steps down before the last short climb begins to the hut. 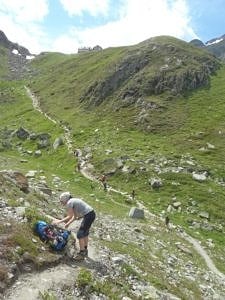 Caution: The Taschach valley is also a large pasture area with free-ranging cows, so take care with dogs and small children.

For people used to heights it takes 2.5 hours to reach the Taschachhaus. When enjoying the scenery more relaxed, taking photo’s etc. it wil take around 3 hours. 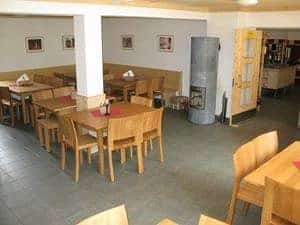 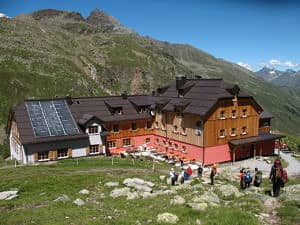 Terrace at the back of the Taschachhaus
© Wikipedia

From Mittelberg to the Taschachhaus