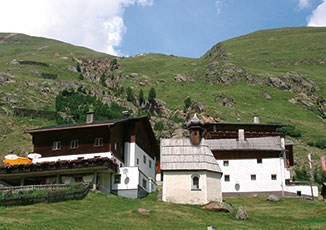 info about the Rofenhöfe in Vent

worth seeing in vent

worth seeing in the Oetztal valley

From Vent to the Rofen farmhouses

Already in the 13th century, the area around Rofen, in Austria, was colonized over the Niederjoch by the people from the Schnalstal valley (Senales valley), near Bozen, in Italy. According to tradition, in the autumn, shepherds were surprised in an early fall of heavy snow, so a return over the 3010 meters high mountains of the Niederjoch was no longer possible.

Thus a first settlement was established at the place of the Rofen farmhouses (in German Rofenhöfe), by sheep-shepherds, who had to build simple huts for wintering. For the first time, in 1280, the existing evidence of these farmhouses in Rofen was documented.

The Counts of Tyrol, headquartered in Merano, established the property boundaries firmly. From 1348 to 1803, the Rofen farmhouses had their own rights by a protection letter from Ludwig of Brandenburg, an opponent of Ulrich von Lenzburg, in that time Bishop of Chur. These rights included not only tax exemption, but also home jurisdiction in a special court that belonged to Bolzano.

Nowadays, the legend is still told, that in the first half of the 15th century, the farmhouses in Rofen became a significant place in the history of Tyrol. The Tyrolean Duke Frederick IV here had found one of its sanctuaries, where he had to hide after he was banned by the Council of Konstanz from the King Sigismund. Historically correct is, that “Friedl with his empty pocket” fled over the Reschenpass to Merano as he reported itself in a letter to the pastor Johann in Tirol.

Today the farms are primarily accommodation in the summer for mountaineers. This area also has international significance, because of the breeding of Haflinger horses. The farms are owned by the Klotz family. In 1848, one of their ancestors, Leander Klotz, succeeded to climb, as one of the first, the Wildspitze (the highest mountain of the Oetztal Alps).

The Rofen farmhouses are situated at a height of 2009 meters above sealevel, about one kilometer west of and 114 meters higher than Vent in the Ötztaler Alps, in Tyrol, in Austria. As well as Vent itself, Rofen forms part of the municipality Sölden in the Ötztal. The Rofen farms are the highest permanently inhabited mountain farms in Austria. 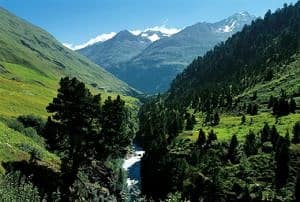 During the Summer, parts of the Rofental valley are inhabited by sheep from the south of Tyrol (in Italy). These sheep are driven over the Ötztaler alp main ridge. In October 2011, the tradition of this transhumance, was taken up by the Austrian Commission for UNESCO in the National Register of Intangible Cultural Heritage.

Get fascinated on this walk along the Rofner creek, among the blossoming Alpine meadows and the eternal ice of the surrounding glaciers.

Along the Rofner creek and its spectacular gorge you will not only find messengers from long past times, as the hunters’ camp or the “hollow stone”, it will present itself to you again and again smaller works of art from the present who tell you their own stories.

Along the countless meadows with Haflinger horses, you also can find some small pools, they reflect clear as a mirror in calm countryside. On this trail you can also prove your courage, while crossing the suspension bridge, which crosses the Rofner gorge.

On the way back to Vent, you can take a break at the restaurant Berggasthaus Rofenhof.

2.1 Summary about the trail.

Follow the road to Rofenhöfe farms. The way back to Vent leads past the suspension bridge and through beautiful mountain pastures with a unique flora.

By car: From Wenns, drive out of the Pitztal valley to Arzl, then follow the B171 to Oetz. Here, follow the B186 into the Oetztal valley, via Umhausen and Sölden. In Zwieselstein, follow the L240 to Vent (Venter Landesstraße). Duration 1.15 hours.

By public transport: From Wenns, take the bus to Imst. Change to Zwieselstein. There is no bus connection between Zwieselstein and Vent.

For people used to heights it takes 40 minutes to reach the Rofen farms. When enjoying the scenery more relaxed, taking photos etc. it will take around 1 hour.