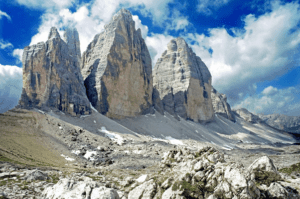 Road through the Dolomites

The road through the Dolomites, a mountain range, in the north of Italy, was opened in 1909 for traffic. The route is one of the most beautiful trails in the Alps. It runs along the main mountain groups Rosengarten, Latemar, Marmolada and Sella.

The route is to ride all year round. In the crossed area, three languages are spoken: German in the Eggental (Val d’Ega), and both Italian and Ladin in Val di Fassa, Val Livinallongo and Val Boite.

The Dolomites are very famous, because of the varied and impressive panoramas. The tour of 163 km. starts at the Drusus bridge, in Bozen (Bolzano in italian), the main capital in the Austrian province of South-Tyrol. From here, follow the Strada Statatale (national road) SS241, in south-east direction, towards Nova Levante, in the Eggenthal (val d’Ega). 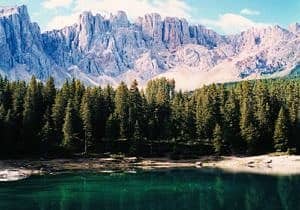 After almost 27 kilometers, the first highlight along the route is the Lake of Carezza (in German Karersee). Latemar, a mountain range which has no other than vertical lines, is reflected in the striking azure waters. Tip: walk a lap around the lake, then you are lost of the crowds in the parking lot with its souvenir shops.

The first pass is the Costalungapas (in german Karerpass, in italian Passo di Costalunga), at a height of 1753 meters. At the top you have a beautiful view. The descent is associated with many curves, the route follows through the valley of Fassa (in Italian: Val di Fassa, in german: Fassatal). Here you can watch the Marmolada mountain range, here are the highest tops in the Dolomites. In Vigo di Fassa, turn to the left (road SS48), towards Canazei (at a height of 1465 meters).

At Canazei, the road leaves the valley of Fassa. Here, you can leave the route and follow the SP641, to visit the Serrai di Sottoguda, the gorge and waterfall in the Fanes valley. This road is called the Passo di Fedaia, the Fedaia pass. 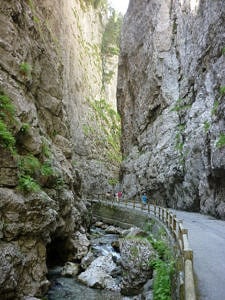 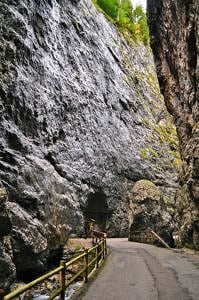 After Canazei, it goes uphill with many turns. Just 6 km after Canazei is a crossroad (here is a memorial to the famous cyclist Fausto Coppi (deceased 1960, at this place he celebrated the greatest triumphs). This route follows the road to the left (SS242), over the Passo di Sella (Sellajoch). The road to the right (SS48) bends up with hairpins to the Passo Pordoi (the Pordoi pass), that ends in Arabba.

Before Plan de Gralba, take the SS243, this is the road over the Gardena pass (in italian Passso Gardena, in german Grödner Joch). This road ends in Corvara in Badia. Here, take the road to the right (SS244), that ends in Arabba. Here, take the road to the left, the SR48, to Cerdanoi. Here starts the road over the Falzarego pass. After almost 120 kilometers, you can go off the route, over the SP638, to another highlight, the Cinque Torri, five tower rock formations. There is a chairlift available and you can walk around it, preferably clockwise.

The Falzarego pass ends in Cortina d’Ampezzo. Follow the SS51.

http://www.falconeriadolomiti.it/en/falconeria-volo-rapaci/ (Show with birds of prey, 9 km before Cortina d’Ampezzo).

From the Pordoi pass, the road descends down to Arabba, through treeless pastures and later by pine forests. (At Arabba strokes a road that leads over the Campo-longopas to the Val Badia). The road continues through the Val Livinallongo. Beyond Arabba, the mountain Peimo looms on as a medieval castle. A little further the road heads straight to the monumental north face of Monte Civetta. After a big forest lies Pieve di Livinallongo, at a heigt of 1470 meters. This town is located on a slope above the Cordevole stream. A little further, the road bends left, into a side valley to Andraz, at a heigt of 1430 meters). Just before and just after Andraz, there are roads to the right, they lead into the Val Cordevole.

Now, the road goes towards the Passo Falzarego. Beyond the second intersection, the road starts to rise significantly (8%). Just before the pas is a hairpin bend, through an unlit tunnel; be careful here. At the left is a branch to the Passo di Valparola, this road is the connection with the Val Badia.

The Falzarego Pass, at a height of 2105 meters, is located between the Monte Averau (at the right, with a height of 2648 m) and the Monte Lagozuoi (at the left, with a heigt of 2803 m). Once again, here, you can enjoy a magnificent view. The descent to Cortina is also very beautiful. At the right shows the Averau and the bad teeth of the Cinque Torn, five crooked teeth.

Later you can see the Monte Cristallo and Sorapis. The road in this area is excellent, with wide, well placed hairpin bends; the gradients are not steep, with the exception of a short stretch of 11%. At Pocol, at the right, strokes quite a difficult, but interesting road that leads over the Giau Pass (at a height of 2236 meters, to Seiva di Cadore.

After many turns you reach Cortina d’Ampezzo. Here ends the actual road through the Dolomites.

But it is worthwhile to continue north-eastwards, further through the mountains of the Dolomites. From Cortina, in northern direction, goes a little steep road, upwards through the upper part of the Valle d’Ampezzo. Following the SS51 to Dobbiaco (Toblach), at the west rises the colossal Tofane and at the east rises the Pomagagnon, at a height of 2450 meters. Beyond the Castello Podestagno, the road bends sharply to the east. On the right sight is the Lago Nero and thereafter the Lago Bianco. At the south of these lakes are the mountains of the Monte Cristallo. At the north are the mountais of the Croda Rossa (Hohe Gaisl). At the small town Carbonin (Schluderbach), the road bends again to the north through the Valle di Landro, to Dobbiaco. (From Cortina to Dobbiaco, it takes 31,5 km.

Or from Cortina, you can take the road (SP 49) that first leads eastwards, around the southern foot of the Cristallo Group (the Sorapis rises in the south). Then along the eastern foot of the same group (in the east is the Gruppo di Cadini), this road leads through Misurina, along the lake with the same name (this road also ends in Carbonin (Schluderbach)). This road takes 35 km.

At Misurina, there is a small road to the right which eventually runs death under the foot of the famous mountains of the Tre Cime di Lavaredo (Drei Zinnen),  located in the Dolomiti di Sesto (Sexten Dolomites). At the end of this (tol?) road is the hut Rifugio Auronzo, with a lot of parking places. From here starts a hiking trail, in two hours, around the Drei Zinnen. 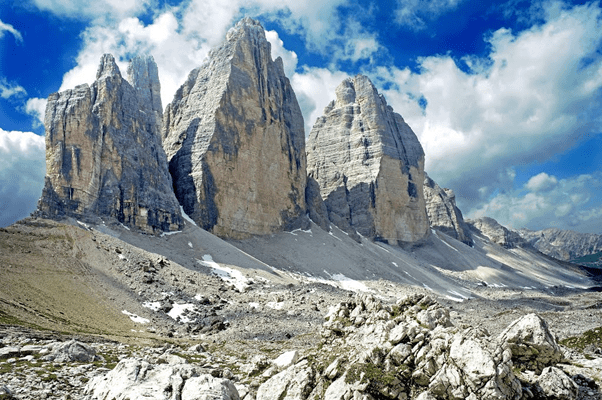 A better and more spectacular end of the trip is not conceivable.

The route starts in Kardaun (Bozen, Bolzano in italian), a place in the wide valley of the river Eisack. The road goes up through the fierce Eggental, then up to the Karerpass, which is the connection to the the Valle di Fassa.

Over this pass also runs the provincial border between Trento and Bolzano. After an easy descent follow ten kilometers through the tourist valley with the villages of Vigo di Fassa and Canazei. The latter is a major ski resort.

After Canazei the road climbs in a northeasterly direction, along the perpendicular walls of the Sella to the second pass, the Pordoi. At 2239 meters, this is the highest point of the road through the Dolomites. Also this pass is the boundary between the Italian region of Trentino-Alto Adige (province of Trento) and Veneto (province of Belluno).

The last stage leads from Arabba through the Falzarego Pass to Cortina d’Ampezzo, the largest and most important town in the Dolomites.

Road trip in the Italian Dolomites